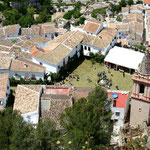 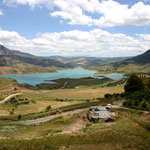 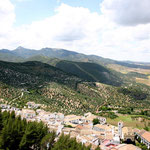 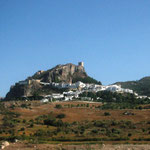 Zahara de la Sierra, is in the middle of the Sierra de Grazalema nature reserve in the north-east of Cadiz province. The village covers an area of 71,3 square and has approximately 1.500 inhabitants.

One of the most beautiful of the villages on the well-known White Villages Route, it is of Arab origin and is thought to have been named after one of Mohammed's daughters. It was always a sought-after enclave for the Moors and the Christians, being considered an impregnable stronghold.

It was declared a historic and artistic conservation site in 1983.

The houses in the village are built along sleep streets under the outcrop of rock on whicj the Torre del Homenaje and the remains of the Nasrid castle (13 th century) are to be found, and from which there are impressive panoramic views.

To the north of Zahara lie Algodonales and the Lijar mountain range, to the west the Bocaleones river, the Margarita mountain range and the villages of Prado del Rey and El Bosque. To the south are Arroyomolinos, Monte Prieto, the Las Palomas mountain pass and Grazalema. To the east lie the Algarín rock and El Gastor.

The flora in the area is characterised by the pinsapo Spanish fir which is only found in this part of Weter Europe. Olive trees are another important feature of the local flora. Olives have been grown here since Roman times and there is an indigenous species, the Zahara manzanilla. There are two olive oil mills that produce one of the vest oils in Andalusia.

Its fauna is also of interest given that Zahara has one of the highest concentrations of grifon vultures in Wurope, a wide variety of birds, and abundant big and small game.